One of the great things about living abroad is celebrating the local holidays. There’s always something a bit quirky and unfamiliar on these special days – from Russian marathon “piknik” days in the woods, to British horse-and-hat exhibitions, to Norwegian bunad costumes… and, now, to the crazy, overwhelming and hangover-inducing land of Spanish fiestas.

For the past two weeks, our little town of Arguineguin has been in the throws of its annual Fiesta del Carmen, celebrated every July in tribute to St. Carmen, patron saint of the sea. I’m not sure how honoring this lady translates into foam parties and all-night DJ extravaganzas, but so it is.

The highlight of the fiesta is on the last day when St. Carmen is paraded through town, loaded onto a boat and taken down the coast to her sister church in Mogan. Sounds like normal, respectful behavior towards a beloved, sea-faring saint, right?

Do you remember that flotilla boat parade they organized on the Thames in London for the Queen’s Diamond Jubilee? The Queen and her entourage stood in full ceremonial attire with proper British decorum, calmly waving to the crowds and the boats that passed.

Yeah. This one in Arguineguin is slightly different…. (Note that some photos below are from last year’s celebration but never posted before. ‘Cause that’s the punctual way I work.)

Parading down to the harbor (photo courtesy of La Provincia, 2013)

The boats begin their journey from Arguineguin to Mogan (2012) 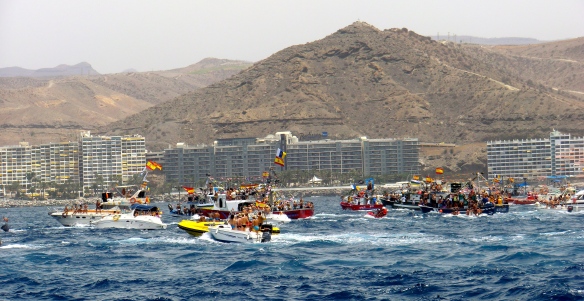 Shipping St Carmen to Mogan (with a totally-not-obvious plug for the Radisson resort in the background, 2012)

Arrival in Mogan (2013). No idea where the lady saint went, not sure it matters to these people…

Per, Per Christian and “Uncle,” thankfully wearing more clothes than the other fiesta-go’ers

Honestly, this fiesta and boat procession will be one of my favorite memories from living in Gran Canaria. The crazy-factor is high and people-watching opportunities abound, but even despite that, it’s a great day out on the water with an authentic Canarian party atmosphere. What could be better than that?

You can read more about the annual Fiesta del Carmen here, here or here.

The Svendsen clan is going on holiday to Norway soon and we’re having friends stay at our house in Gran Canaria while we’re out. These friends are two very normal, male friends of ours – two decent, responsible and more-or-less mature 30-something men.

So how do I stock the house for them in our absence….?

It was completely unintentional, but as I was unpacking the groceries I realized what my subconscious had accomplished. It made me laugh a little because, yeah… Men… beer… toilet paper… Duh.

I’m sure when said friends arrive and see how I stocked for their visit, they’ll offer me a virtual high-five and wonder why I wasted money on the toilet paper.

So am I guilty of gender stereotyping now? Are the gender police going to come after me about my archaic view of male roles in society? Should I have substituted the beer for white wine and the toilet paper for scented bath bubbles?

I’m so over all these debates raging about gender in the news these days – about who said what about whom during whatever sensational interview. If a woman wants to focus all her attention on her family, let her. If she wants to work 60 hours a week and build a nursery in her office, let her. If she wants to sit around and drink beer and wipe her bum with toilet paper all day, for goodness sake…. let her.

My life right now is almost a dictionary-perfect version of old-school stereotypes. I haven’t worked for two years because we moved overseas for my husband’s career. I put my management consulting career on hold to take care of my family and support our life abroad. My son loves cars, trains, helicopters and dump trucks – not a single doll or pink tutu is evident anywhere in our house.

Some people would say I’m wasting my potential, that I can’t possibly be fulfilled “just” staying at home. But here’s the point…. I know that in a few mere minutes, the situation will have changed again to who-knows-what. Jobs come and go, new homes come and go, time passes and roles shift and life gives us something else to make work. And nothing that anybody says on Fox news or elsewhere is going to impact that. I don’t need the gender police to make sure I’m not offended by some idiot’s ramblings – karma, dude. It’s a bitch.

So I apologize in advance to our visiting friends who will have to live under the yoke of gender stereotypes while in our home. If you feel oppressed and can’t manage to live to your fullest potential while on holiday, I can direct you to the nearest supermarket to buy your own damn wine and bath bubbles.

The Svendsen clan was lucky enough to actually get away for a real summer holiday this year, something we haven’t done since Per Christian was three months old and we went to Greece for 10 days. That was a hell of a trip, to say the least – a real introduction to how our holidays would NEVER be the same again.

This year, I was insistent upon visiting “The Mainland,” believing in my heart of hearts that living in resort-dominated Gran Canaria was not the same as seeing Spain. So we joined forces with some good friends who have a son relatively equal in age and energy to our own, and we rented this villa together in the Ronda mountains of southern Spain for a week.

Pappa P and I spent a few days in Seville with Per Christian before we drove south, which suitably heightened my itch for a return to urbane life ASAP. Seville is a lovely city, complete with an ancient, cobble-stoned pedestrian area, a lively city centre with plenty of shopping, and oodles and oodles of tapas bars to quench our boredom with Canarian papas con mojo.

In typical Svendsen fashion, we were hopelessly lame tourists and took zero photographs in Seville. Forgive me, grandmothers. I’m afraid Per and I have never been good at the whole castle/museum/cathedral shin-dig, preferring instead to spend our time mindlessly wandering the streets in between stops for tapas and cava.

And how about Per Christian, you ask? How did we manage with a two-year-old in the midst of all this cava? Somewhat surprisingly, it was just fine! He walked around with us, slept when he was tired, charmed the waitresses into giving us better service, and pointed out all the buses, cars, taxis and horses along the way – just in case we didn’t happen to see them ourselves. I think his favorite part was the hotel room itself (thank you El Rey Moro hotel for the lovely service and babysitter arrangements) and he adored the TV channel that played Top Gear on continuous repeat.

Truth be told, Pappa P and his son were equally pleased with that little discovery.

So, unfortunately, we have very few photos of the holiday, but here are the few existing shots to help soothe the hearts of our love-sick Grandmothers out there:

Don’t be fooled – that sweet little man can really pack a punch!

The boys were delighted with the horses in the mountains 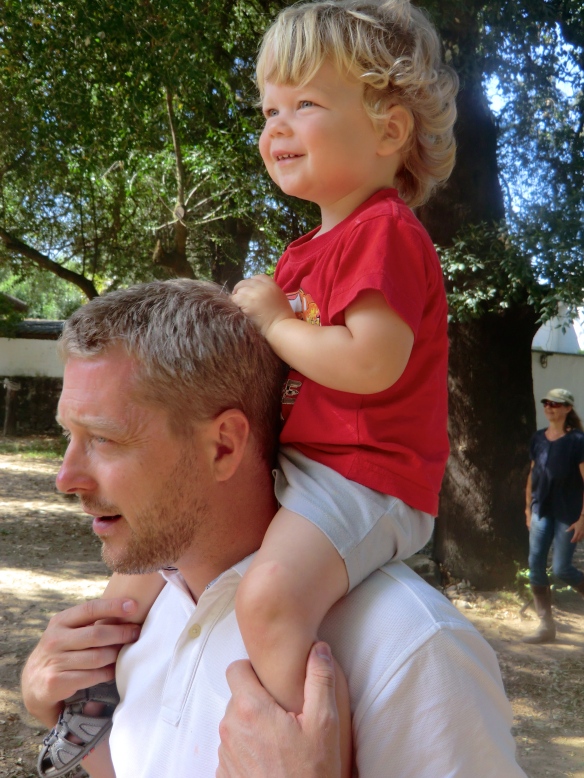 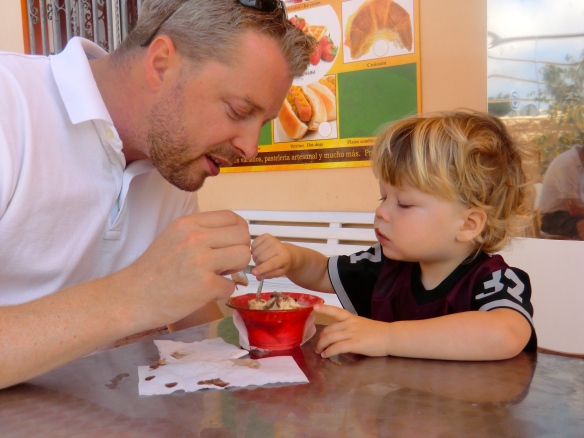 Upon returning home, Per Christian received critical “sharing” lessons from Pappa. We’re still working on it.

The Svendsen family consists of two confused thirty-somethings and one small boy who obviously runs the show. We're still trying to find a happy medium between our pre-toddler Prosecco days and more recent Pamper days. It's not always a successful combination, but it's certainly never dull.