I love the 17th of May in Norway. It’s just like the 4th of July in the US, but swaps out the shorts, t-shirts and barbeques for traditional costumes (bunads), blue suits and brunch. The entire town is covered in Norwegian flags, even the trams and taxis are outfitted in patriotic gear. And until you have school-aged children who march through town in the children’s parade (we still have some years before that…), it’s the perfect excuse to get dressed up and drink Prosecco in the middle of the week.

Our good friends Christian & Eline hosted this year’s brunch at their fabulous new home just outside Oslo’s city centre. Christian worked round-the-clock before the holiday to finish their terrace outside – the weather gods rewarded his efforts and showered us with sunshine on the big day.

It was also Per Christian’s first 17th of May. I hope he will someday forgive his mother for dressing him up like a drunken sailor for the occasion:

Some examples of the bunads on display yesterday are below. These are serious get-ups, quite expensive and usually passed down from generation to generation. Each bunad has colors and patterns that represent a region of the country. They’re only pulled out for the most special of occasions, such as weddings, baptisms, confirmations and the 17th of May. (I have also heard that they are made with expanding waistbands so you can still use them as you get older and fatter. Good call – those crafty Norwegians really know how to make a garment last…) 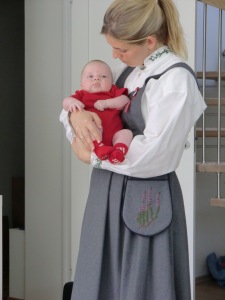 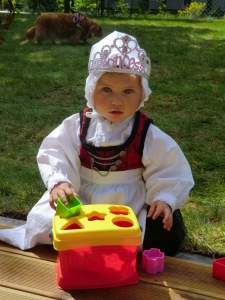 They even include shoes and tights the remind me on the Jolly Green Giant, but are essential for full bunad correctness:

Per Christian spent the day sleeping on various shoulders and charming the crowd per usual: 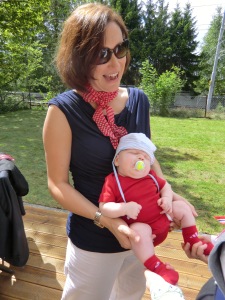 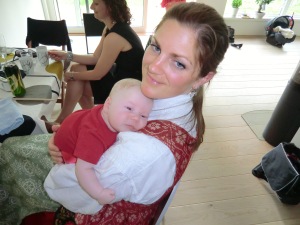 So from a happy Svendsen family, surviving our way through early-stage parenthood and still sipping the occasional prosecco along the way, we hope you all had a glorious 17th of May! 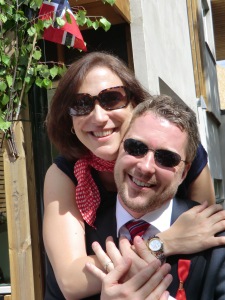